K and I watched Free Solo last night, which, like everyone else who isn’t a rock climber, I had initially assumed was a Star Wars spinoff. Nope. Rather than spotlighting Leia’s daring rescue of Han from Jabba, this focuses on one man’s attempts to make the greatest number of people say “oh hell no.” The title refers to a rock-climb done by one person (the solo part—duh) without any ropes. That’s the free part, and after years of listening to Tom Petty I can’t help but follow the word “free” with “free falling.” Which is unfortunate, because without ropes, a fall of only a few dozen feet could potentially kill you. El Capitan, where this climber went, is 3200 feet. Yeah, I’m free…

Spoiler alert, he doesn’t fall. There wouldn’t have been a movie otherwise, though even one of the cameramen turned his head and shut his eyes at a particularly ridiculous section of the climb. As an ultrarunner I’ve heard plenty of people ask, “Why? Why would you do that to yourself?” but to me ultrarunning seems infinitely safer and saner than going up the side of a rock cliff hanging on quite literally by your fingertips. The nearest the climber, Alex Honnold, gets to explaining why he wants to do this is when he says he seeks perfection. Rock climbing at this level is a dance, precisely choreographed, with no room at all for error. You have to be perfect, or you die.

As appealing as that sounds, I’ll pass. I’m glad there are people in this world who seek that level of perfection—they accomplish amazing things—but I’m definitely not one of them. My life has never been about being perfect. If anything, it’s frequently about the opposite: messing perfectly fine things up, often deliberately, just to try something new. I sometimes think there is way too much emphasis on getting things right, making things perfect—or at least making things look perfect. Obviously nobody wants to screw up their entire life. Luckily, my life has not been a free-solo climb. I’ve run far more bad races than great ones. Every draft of everything I’ve ever written was worse than the finished product. And I didn’t meet Mr. Right until I was 45 years old. I’ve gotten things wrong in life far more than I’ve been right, and I too am still here.

And the sweetness of getting it right later on in life, when you didn’t think it might ever happen, is I daresay as satisfying as anything you get right the first time. I didn’t start running until I was 37 years old, but then if you read this blog, you probably know that story already. Here’s one you don’t know, and it’s a doozy. Fred, our adopted green-wing macaw, is 27 years old. His flight feathers had been clipped when he was young, a common practice and one considered practical for most bird owners. The flight feathers eventually grow back, but they’re absent during the critical time when birds fledge, so Fred simply never learned to fly. That was OK; he still had a good life with caring people. When we got him, he had spent his entire life indoors and had probably never even seen a bird fly. And then he saw Boston and Phoenix. Something would seize him whenever they took off: he’d start squawking, anxiously, and flapping his wings in a frenzy. It was like something awakened in him, seeing creatures who looked like him doing something he didn’t realize until right then he might have been capable of doing. Except that he wasn’t capable of doing it. He could imitate flight, but that was all. K didn’t think it likely he ever would fly.

It was windy, which actually tends to make flight easier for our boys, since they can ease into their landings by simply floating down to K’s arm against the breeze. Fred, on an outdoor perch, spread his wings and flapped frenetically as usual. And then a gust of wind hit him and next thing he knew, he was airborne. Gliding isn’t flying, of course, but rather than simply being carried by the wind, Fred did what he’d tried to do in imitating Boston and Phoenix, and he flew. It was wobbly, and he landed unceremoniously on the ground after about a hundred yards, but it was flight.

Back in the aviary that evening, Fred still seemed a little surprised at what had happened. But it happened. Unlike a free-solo rock climb, in much of life we don’t need to be perfect, just persistent. Free-falling can become flying after all. 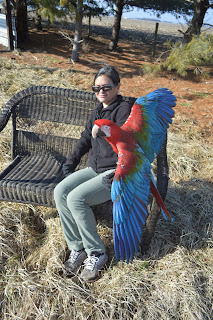